Should you use Descript for your vlog?

Hello vlogger! If you’re reading this, we assume it’s because you’re trying to decide if Descript is the right tool for editing your vlog. Instead of just giving you a sales pitch, we’ve prepared a FAQ to help you determine if Descript is right for you. Our guidance will evolve as we ship more features, so please check back. And if you have questions that aren’t covered here, let us know and we’ll add them!

How is Descript different from other video editors?

The biggest difference is that when you record or import video, we transcribe it, and then you can edit the video by editing text. If you want to delete an outtake, just select the words in the script and delete them, and the video goes along for the ride. If you want to add an image, title, b-roll, or music, you just drag it into the script where you want it to appear. It’s really just like using a doc.

Descript also has a timeline editor, designed to be used in conjunction with the script, when you need to fine-tune clips or add transitions. You can even close the script view and use it like a traditional editor.

What are the main reasons to choose Descript?

It’s easy, fast, and fun. Not only does Descript bring editing within reach for people who aren’t experienced with timeline editors, it’s just way faster to edit with Descript, even if you’re a timeline editing pro. And because you’re not spending as much time futzing around with clips on a timeline, you’re spending more time in the creative part of your brain instead of the technical part. It’s really fun to use.

It’s collaborative. Descript is also the first audio/video editor that has Google Docs-style multi-user editing and commenting. While Descript is a desktop app and it can run offline, when you’re online, everything is synced to the cloud, so you don’t have to mess around with files and stuff. Descript works the way you expect software to work in 2020 (but no other video editors do).

We have some crazy features that no one else has. For example, you can remove all of your “ums” and “uhs” with a click. Also you can create a clone of your voice and use it to make corrections to your voiceover without re-recording. Or use that same voice clone to forgo recorded audio altogether and just type your entire voiceover. Here’s an example of a customer that did that:

It also works with audio. Descript is a new kind of editor that’s equally at home making editing audio as it is with video. So if you’re thinking about, for example, making a podcast and a video from the same raw content, you can do that all with one tool.

What are some reasons that Descript might not be right for me?

Features. The biggest reason would be if we don’t yet support a feature that you can’t live without. Descript has everything most vloggers need ー non-destructive multitrack editing, titles, basic transitions, animation, 4k export, a screen recorder, subtitles, and more ー but we’re not going to sit here and pretend you can make an Avengers movie with it. Yet!

Here are some things that we don’t have right now: complex animated title sequences, color grading, visual transitions other than simple dissolves, chroma keying, clip speed, clip rotation. If those or other features are important to you, vote them up on our feedback board.

Your videos don’t have a lot of speech in them. If you make instrumental music videos or something, you can do that with Descript, but you’d just be closing the script view and using it like a normal timeline editor, so the upside isn’t as big when compared against other video editors. Maybe you’d still use Descript because it’s collaborative?

Mobile. If you need to edit on a mobile phone, we don’t do that right now. Lots of people like Adobe Rush for mobile editing, so check that out if you haven’t already.

Language. Descript only works in English.

Can I use Descript in conjunction with other editing tools? 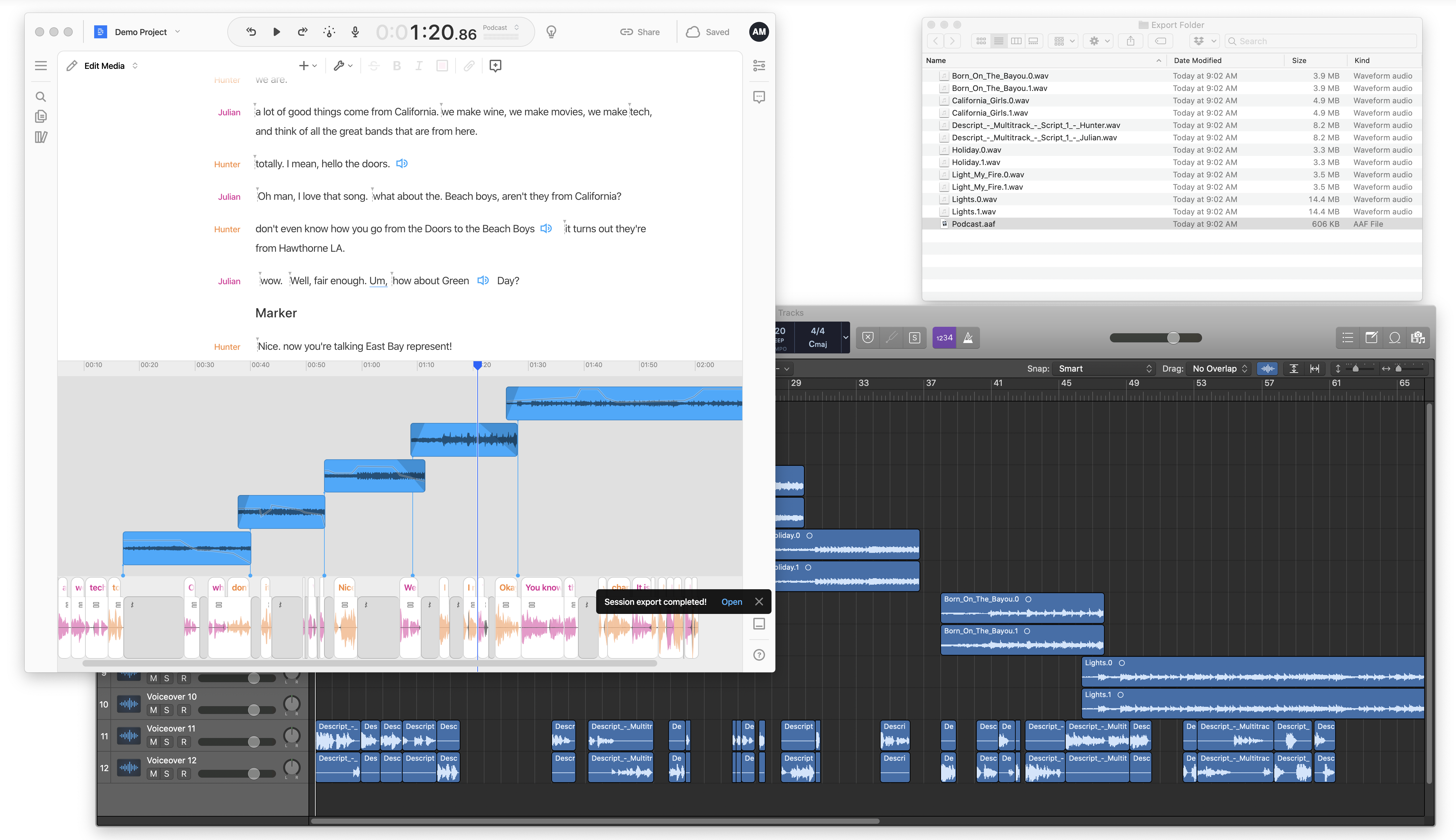 Yes - you can do your initial edit in Descript and then export to Premiere or Final Cut Pro. Our Timeline Export feature preserves your clip edits and original files. This feature is popular with many of our customers who are more experienced video editors - they use Descript because it’s so fast to do the initial cut, and then they export to another tool for final touches.

You should just download Descript and noodle around. Trying it out is free and, regardless of whether you decide to become a paying customer, there’s nothing like it and using it will give you that make you feel like you’re in the future. So if you cultivate experiences like the first time you put on a VR headset, check it out for one of those.

Descript is a collaborative audio/video editor that works like a doc. It includes transcription, a screen recorder, publishing, and some mind-bendingly useful AI tools. 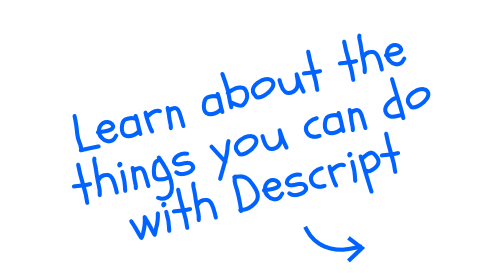